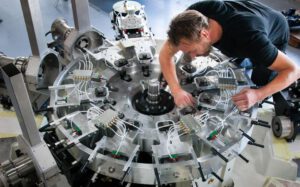 This week the Emmer machine builder Consejo will move into Inmaco in Hoogeveen. It is the third restart that Joep Lüth and business partner Marthijn Broeils of the PM Group from Dedemsvaart will realise in two years time.

In Hoogeveen, Lüth is in charge of Inmaco and Hilmar, companies that have grown considerably and that were still falling over two years ago. Inmaco makes machines to make packaging. Packaging made of cardboard, paper and pulp.

A few years ago Lüth took over the family business PM Group from his father. The PM Group has branches in places such as Dedemsvaart, Enschede and Almere.

Lüth Broeils bumped into the university. Business clicks and soon there is an appointment to work together in a company outside PM if the opportunity arises.

That opportunity won’t be very long in coming. In Hoogeveen Hilmar and Inmaco got into trouble.

Both companies will be in a state of suspension of payments at the beginning of 2017. Lüth and Broeils come into the picture through administrator Jeroen Sprangers of Asser REIN Advocaten.

“What we found? The biggest problems were with Hilmar. There was heavy investment just before the crisis broke out. The company did a lot for the oil and gas industry when the price of oil went down. They also did a lot for the nuclear industry, but it was hit hard by the Fukushima disaster.”

For Hilmar it’s three strikes in a row and that cuts it for the holding company of which Inmaco is also a part. Inmaco did have work, but because of the holding company’s liquidity problems, they did not have the financial strength to take on large projects. As an independent part of the PM Group they did”.

The major projects Lüth is talking about are, on the one hand, machines that make biodegradable packaging. Packaging that replaces plastic packaging from large food manufacturers. On the other hand, it concerns machines that can make packaging material from pulp. For example, to replace polystyrene foam.

Plastic packaging is disappearing more and more. Cardboard, paper and pulp packaging are replacing them. Styrofoam, which is contained in boxes to protect products such as a television or computer from damage, is also increasingly being replaced by products made from biodegradable pulp.

The only one in the world that makes ’round’ lids

And in Hoogeveen they are leading in making machines that can produce such packaging and pulp products. In a showcase Luth has several examples: boxes for margarine, spreads, chips, ice trays made of cardboard and paper or egg cartons and flower boxes made of pulp: We are the only company in the world to supply machines capable of making lids that are round (square with rounded corners).

The flight that the demand for these products is going to take is enormous. For example, Unilever has just announced that by 2025 half of its plastic packaging will have to be replaced by biodegradable packaging. “What does that tell us? It tells us that we’re already busy, but that it’s really only silence before the storm that’s about to erupt”.

In simple numbers: Inmaco expects sales growth of 400 percent in the pulp division alone in the coming year. The number of employees has doubled in the past two years. Next year that number will double again.

Consejo will be added to that success story. Consejo has the technology to make the outer packaging. Actually, the packaging in which our products and the products of third parties can be put back.

Consejo went bankrupt a few weeks ago. Curator became Jeroen Sprangers. “And they thought machines and packaging, they do that in Hoogeveen too. That’s why he called us.

Lüth doesn’t have to think long. Half an hour after the call from Sprangers he is in Emmen. The same day he decides to continue with Consejo. “Consejo continues to exist as an independent brand. But it gives us the opportunity to integrate the process with the projects where it fits.”

Busy? It’s full of energy. It’s fully focused. But that’s okay, the sun’s not shining outside these months anyway. The first contacts for orders for Consejo are already there.

Get in touch with inmaco

Get in touch with inmaco